Why are characters such as "?" and "?" not being recognized?

I have a problem when adding characters such as "?" or "?" while generating a PDF. I'm mostly using paragraphs for inserting some static text into my PDF report. Here is some sample code I used:

The output I get when the PDF file is generated, looks like this: "Testing of letters ,,Š,Ž,?" For some reason iTextSharp doesn't seem to recognize these letters such as "?" and "?".

First of all, you don't seem to be talking about Cyrillic characters, but about central and eastern European languages that use Latin script. Take a look at the difference between code page 1250 (https://en.wikipedia.org/wiki/Windows-1250) and code page 1251 (https://en.wikipedia.org/wiki/Windows-1251) to understand what I mean.

That is a bad practice. Code files are stored as plain text and can be saved using different encodings. An accidental switch from encoding (for instance: by uploading it to a versioning system that uses a different encoding), can seriously damage the content of your file. You should write code that doesn't contain special characters, but that use a different notations. For instance: "Testing of letters \u010c,\u0106,\u0160,\u017d,\u0110"

This will also make sure that the content doesn't get altered when compiling the code using a compiler that expects a different encoding.

Your fifth mistake is that you didn't define an encoding when using the font (this is related to your second mistake, but it's different).

I have written a small example called CzechExample so that the result looks like this: 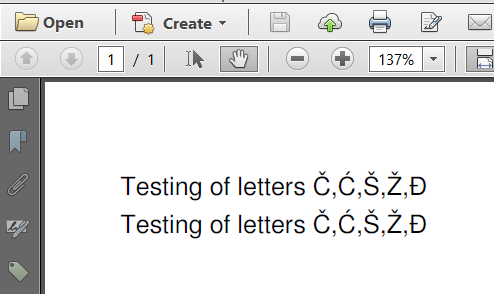 Czech characters in a PDF

I have added the same text twice, but using a different encoding:

To avoid your third mistake, I used the font FreeSans.ttf instead of Helvetica. You can choose any other font as long as it supports the characters you want to use.

To avoid your fourth mistake, I have set the embedded parameter to true.

As for your fifth mistake, I introduced two different approaches.

This will embed the font as a simple font into the PDF, meaning that each character in your String will be represented using a single byte. The advantage of this approach is simplicity; the disadvantage is that you shouldn't start mixing code pages. For instance: this line won't work for Cyrillic glyphs because you need "Cp1251" for Cyrillic.

In the second case, I told iText to use Unicode for horizontal writing:

This will embed the font as a composite font into the PDF, meaning that each character in your String will be represented using more than one byte. The advantage of this approach is that it is the recommended approach in the newer PDF standards (e.g. PDF/A, PDF/UA), and that you can mix Cyrillic with Latin, Chinese with Japanese, etc... The disadvantage is that you create more bytes, but that effect is limited by the fact that content streams are compressed anyway.

When I decompress the content stream for the text in the sample PDF, I see the following PDF syntax:

How double-byte characters are stored inside a PDF

Many people think that creating PDF is trivial, and that tools for creating PDF should be a commodity. In reality, it's not always that simple ;-)

Click How to use Cyrillic characters in a PDF? if you want to see how to answer this question in iText 5.